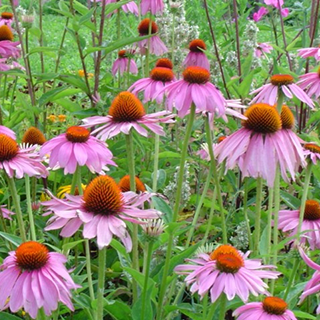 Native to the eastern part of the US, echinacea was once known as “Missouri snakeroot” and was traditionally used by Native Americans for fevers and poorly healing wounds. It was introduced into Europe in the 19th century and has been extensively researched since, largely as an antibiotic remedy for treating a broad range of infections. The herb is an immune stimulant that increases overall resistance to disease. Useful in treating the early phases of bacterial and viral infection, echinacea speeds resolution of colds, flu and all kinds of upper respiratory infections. The herb makes an anti-inflammatory treatment for infected wounds and the bites of reptiles and insects. Echinacea is also a potent sialagogue (promotes salivation).

GARGLE/MOUTHWASH
Use 1 cup of above root decoction or 2 tsp of tincture in a cup of warm water 2–3 times daily for sore throats, mouth ulcers, and tonsillitis.

CREAM/OINTMENT
Use on infected cuts, boils, acne, and skin sores.

HARVEST
The leaves can be gathered throughout the growing season, and the roots of four-year-old plants are lifted in autumn after flowering is over. The seed harvested at maturity and dried.