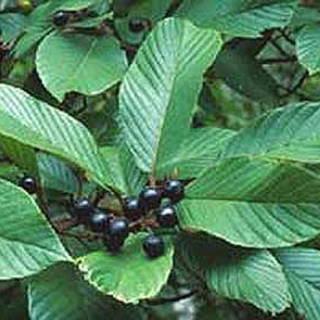 INFUSION
As a laxative for constipation, a typical dose is 1 cup of tea, which is made by steeping 2 grams of finely chopped bark in 150 ml of boiling water for 5-10 minutes, and then straining.

SYRUP
Combine 1 part of the strong decoction with 2 parts of honey. Take 2 tablespoons (30 ml) before bed. Best to begin with low dosage and adjust on future occasions according to the degree of response.

LIQUID EXTRACT
The cascara liquid extract is taken in a dose of 2-5 ml three times daily. The appropriate amount of cascara is the smallest dose that is needed to maintain soft stools.

GROW
Cascara sagrada trees are usually grown from grafting, because the process of growing from a seed takes so long, in areas with soil that does not drain well, or near a pond or stream.

HARVEST
The bark is sliced and peeled from the wood in spring, dried and aged for at least 1 year before use.